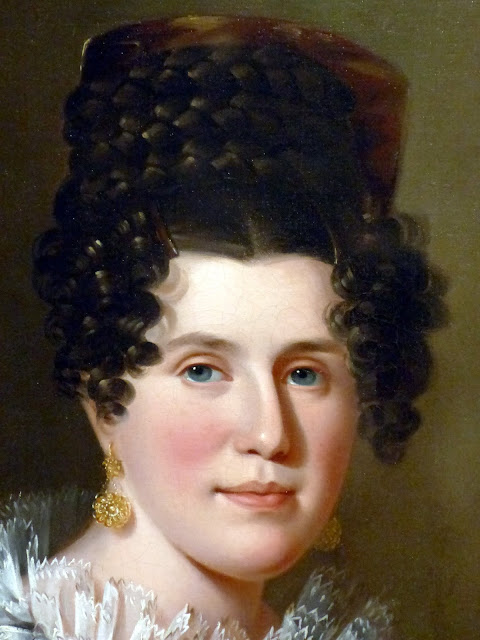 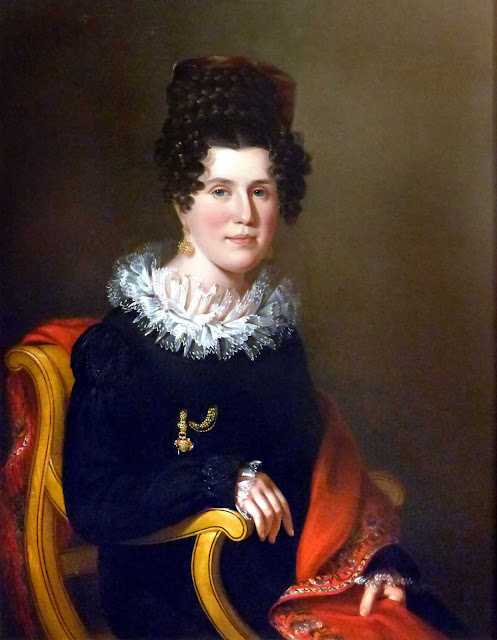 This 1821 portrait of Susan Oakford Avery, Mrs. Isaac Avery, by Sarah Miriam Peale hangs in the National Museum of Women in the Arts in Washington, DC. Susan an her husband Isaac share a single label in the NMWA, concerned mostly with the painter.


The youngest daughter of the American painter James Peale, Sarah Miriam Peale was the leading portrait painter in Baltimore and St. Louis during the mid-nineteenth century. She and her sister, Anna Claypoole Peale, a miniaturist, were the first women to be admitted into the Pennsylvania Academy of the Fine Arts.

These pendant portraits of a wealthy Philadelphia couple reveal why Peale was one of the most sought-after portraitists of the time: highlighted against a dark background, the figures are depicted in precise detail, even down to their accessories. - NMWA 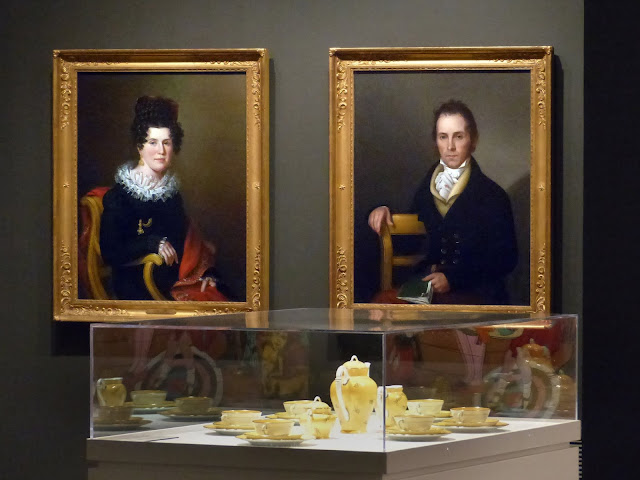 We find this slightly longer discussion on NMWA's facebook page:


In what are likely their wedding portraits, Susan and Isaac Avery sit in slightly stiff, formal postures with their bodies angled and their gazes directed toward the viewer. Their stylish chairs and rich attire indicate their wealth and status.

Particularly noteworthy are Susan’s earrings and heart-shaped pendant, as well as the tortoise-shell hair combs just visible at the back of her head and amid the curls near her face. Isaac probably manufactured such combs, which were expensive items at the time. Cashmere shawls of the kind draped around Susan’s left arm were equally luxurious.

Peale’s affinity for painstaking naturalism is further evident in the highlights on Isaac’s stick pin, watch chain, and the double row of gold buttons on his jacket. In fact, she painted the second button from the top, on the viewer’s right, twisted at an angle to make it catch the light. In both portraits Peale balanced the specificity of such details with the plain background that focuses attention on the figures themselves. -- NMWA Facebook

Find-a-Grave tentatively identifies the sitter as Susan Oakford Avery who was born  in 1795 in Philadelphia and died on the 9th of August 1849 in Philadelphia. Her headstone in Laurel Hill Cemetery in Philadelphia reads “Susan wife of Isaac Avery.”