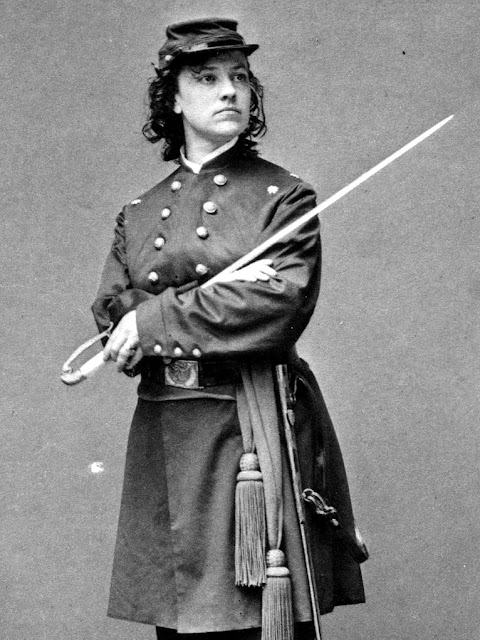 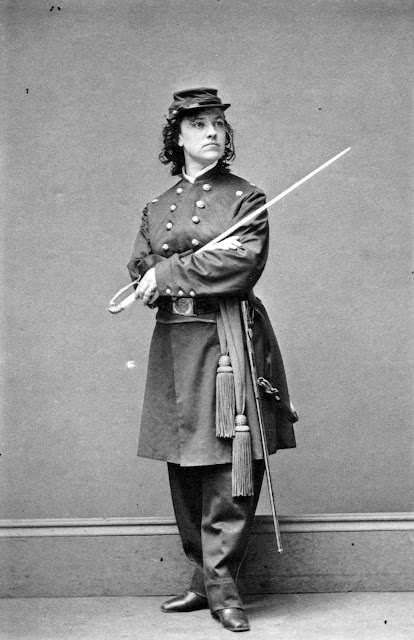 This Ambrotype of Pauline Cushman (1833-1893) by Mathew Brady's Studio hangs in the National Portrait Gallery in Washington, DC.


A brief but harrowing career as a Union spy transformed minor actress Pauline Cushman into a major celebrity. In 1863, while appearing in a play in Union-occupied Louisville, Kentucky, Cushman gained entrée to Confederate circles by publically feigning Southern sympathies. Hailed as the darling of the rebel troops, she gathered intelligence for the North until her duplicity was discovered. Arrested, tried, and condemned to hang, she was rescued by Union forces before the sentence could be carried out.

In recognition of Cushman's service to the nation, she received a commendation from President Lincoln and was awarded the honorary rank of Major. In June 1864, P. T. Barnum advertised that “MISS MAJOR PAULINE CUSHMAN! THE FAMOUS UNION SPY AND SCOUT,” would recount her “EXTRAORDINARY EXPLOITS and ADVENTURES” during a series of appearances at his American Museum. Barnum also advised patrons that “elegant” carte-de-visite portraits of Cushman would be offered for sale. -- NPG 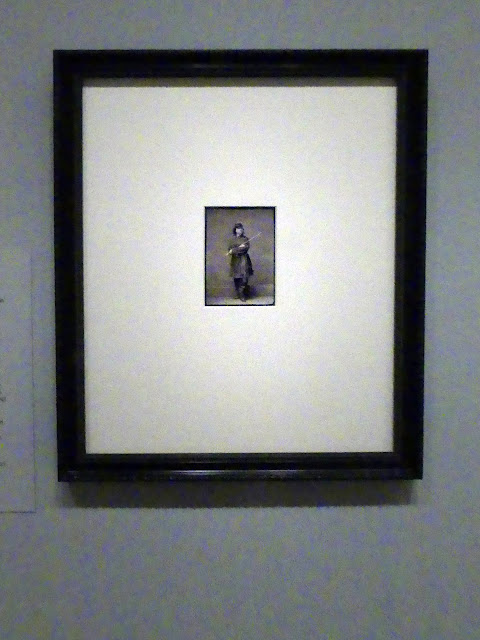 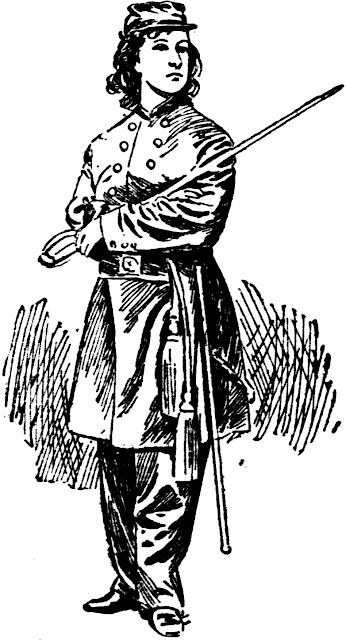 Another ca. 1865 Carte-de-visite of Pauline Cushman belongs to the Library of Congress, this one by E. & H.T. Anthony. 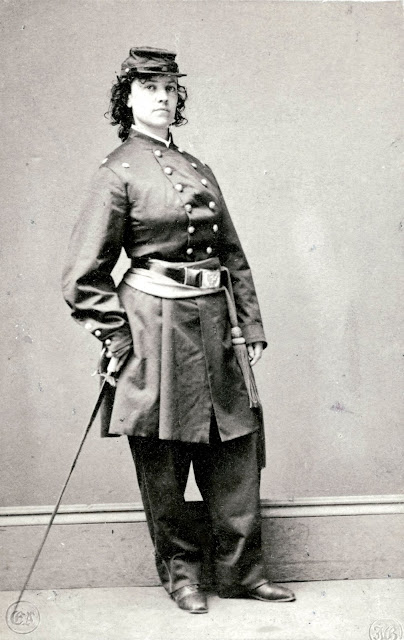 This portrait of Maj. Pauline Cushman appeared in the “exagerated” 1865 biography by Ferdinand L. Sarmiento. 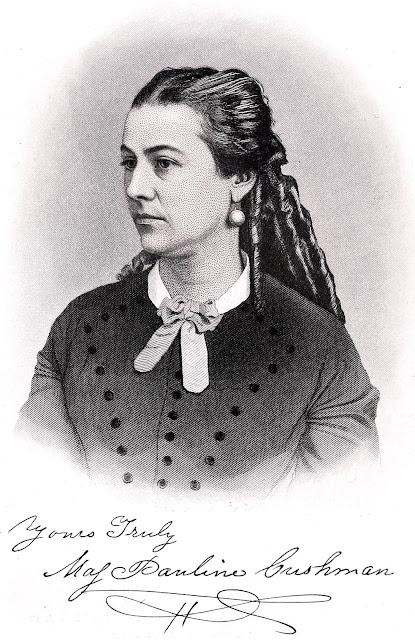 In March of 1863, Actress Pauline Cushman, born Harriet Wood in 1833,  was offered money to give a toast “to Jefferson Davis and the Confederacy” from the stage during her performance at Wood's Theatre in Louisville, KY. After consulting the Union Provost Marshall she accepted the money, make the toast and was fired from the theatre. Thus began her carrier as a Union Spy. 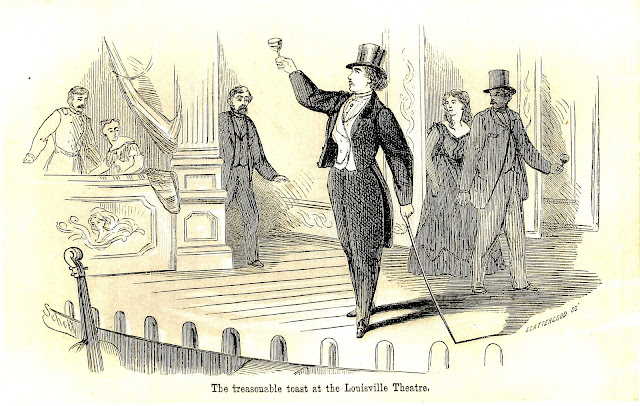 The Treasonable Toast at the Louisville Theatre
(Sarmiento)

Everyone in the audience leaned forward as Pauline walked out in her role as a fashionable gentleman. She lifted a wine glass as if to drink with a friend. Then she stepped forward and surveyed the audience. Her clear voice rang out: “Here's to Jeff Davis and the Southern Confederacy. May the South always maintain her honor and her rights!” -- Ryan Ann Hunter, 2013.

The San Francisco Call published a feature on Pauline Cushman on Sunday June 19 1898. 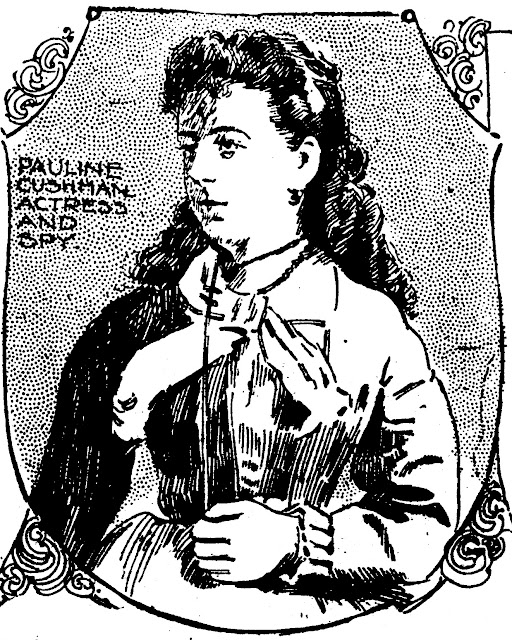 Here she's shown gathering intelligence for the Union and being caught by a Confederate sentry carrying information on the location of Gen. Braxton Bragg's headquarters. She was convicted of spying and sentenced to hang. (illustration from the San Francisco Call) 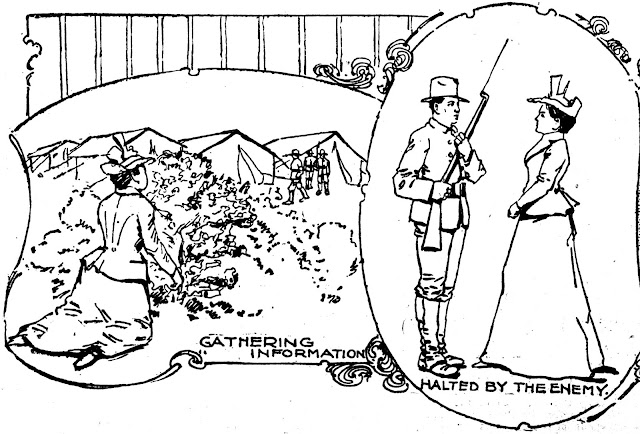 When the town of Shelbyville was taken by Union troops, Confederate troops retreated leaving their prisoner behind. 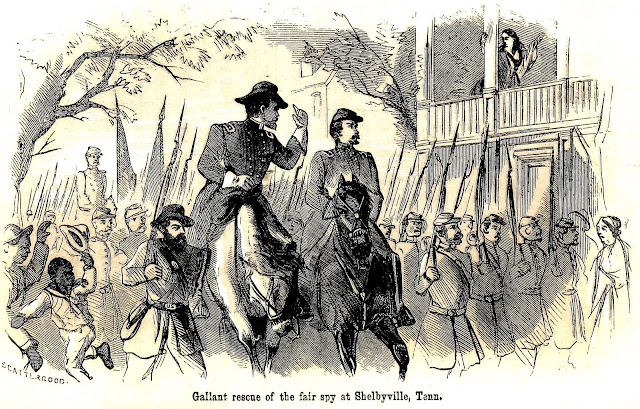 Gallant rescue of the fair spy at Shelbyville, Tenn.
(Sarmiento)

After the war Cushman spend 10 years capitalizing on her fame as a Union Spy. 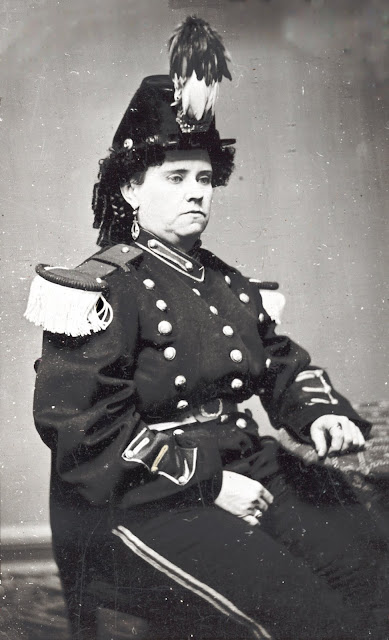 Pauline Cushman in Military-Style Costume
between 1880 and 1890
(LOC)

In 1872 she married her third husband Jeremiah “Jere” Fryer. They moved to Casa Grande Arizona and ran a hotel. In 1890, after the death of their adopted daughter, she left Jere and Casa Grande. She lived in poverty in El Paso, Texas before applying for and receiving a back-pension for her husband's military service.  She settled in San Francisco where she died of an opium overdose in 1893 and was buried in San Francisco National Cemetery.

Her headstone reads: “Pauline C. Fryer / Union Spy.” However this photo from the San Francisco Call, June 16 1912 says “Pauline C. Tyer”  and the 1912 article repeatedly refers to her as Mrs. Tyer. 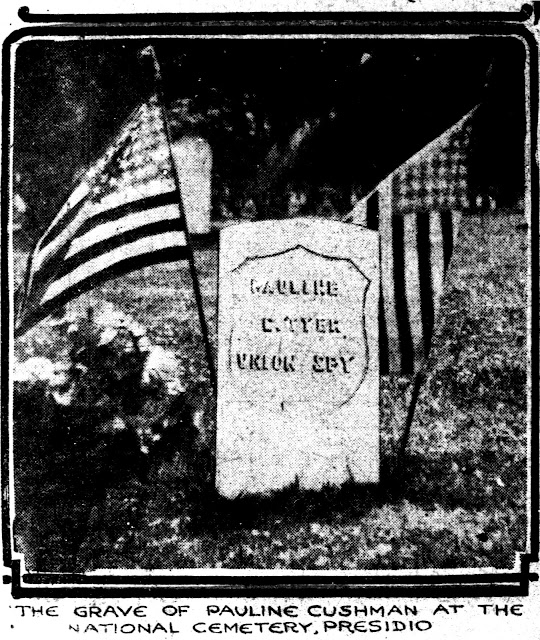 The Grave of Pauline Cushman
at National Cemetery, Presidio

The headstone in the National Cemetery today is clearly not the same stone, the shield surrounding the inscription is missing. 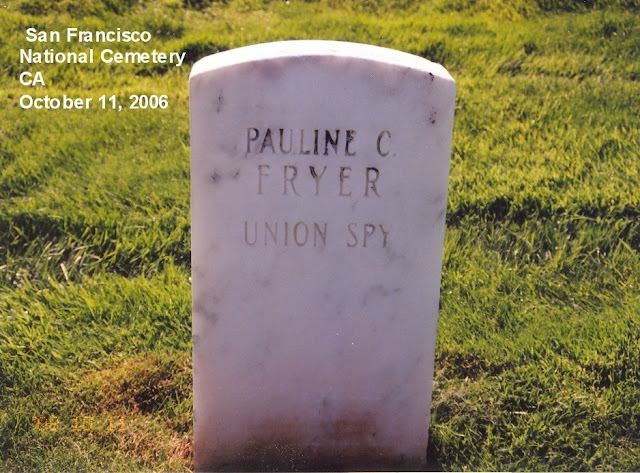