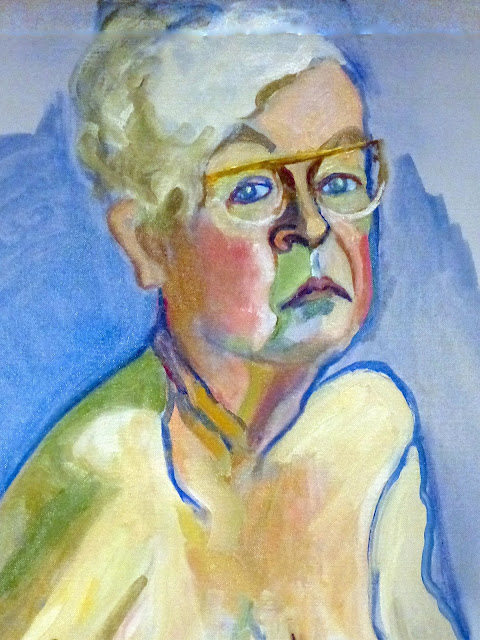 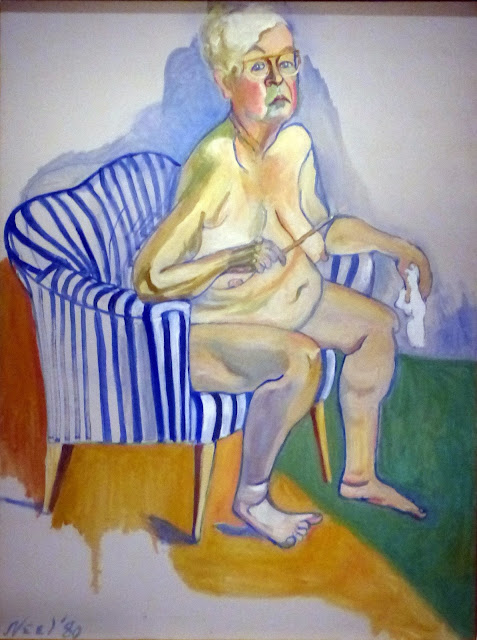 This 1980 self-portrait of Alice Neel hangs in the National Gallery in Washington Dc.


"In making a portrait, one critic observed, Alice Neel 'hurls shafts that hit the mark but do not sting,' pinpointing the penetrating yet benevolent quality in the figure studies for which she is best known. Neel adhered to portraiture in the midst of the abstract expressionist movement and was consequently ignored by the art world until shortly before two retrospective exhibitions held during the early 1970s. 'Life begins at seventy!' she said of her career's newfound transformation. In 1975, she began this shocking, endearing, and utterly unconventional self-portrait, which was not completed until 1980. As Neel noted, 'the reason my cheeks got so pink was that it was so hard for me to paint that I almost killed myself painting it.' A striking challenge to the centuries-old conven­tion of idealized femininity, Neel's only painted self­portrait is wonderfully suggestive of her bohemian, bawdy character." -- National Portrait Gallery 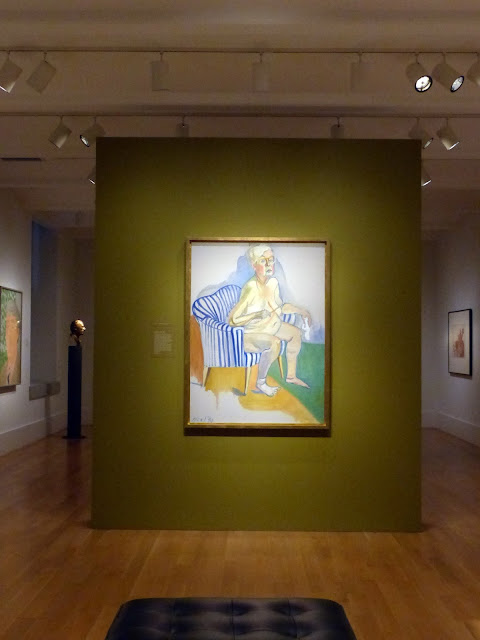 Wikipedia says this of Alice Neel's self portrait


"Neel painted herself in her eightieth year of life, seated on a chair in her studio. She presented herself fully nude. She wore her glasses and held her paintbrush on right hand and an old cloth on the other hand. The white color of her hair and the several creases and folds of her bare skin indicated her old age. As she painted herself seated on the chair her body faced away from the viewer while head was turned towards the viewer. The portrait was completed in 1980 but she had started to paint it five years earlier, before abandoning it for a period of time. However, she was encouraged by her son Richard to complete it and came back to in her early 80s as she was also invited to take part in an exhibition of Self-Portraits at the Harold Reed Gallery in New York. When Neel’s unconventional self-portrait was showcased it attracted considerable attention. Neel painted herself in a truthful manner as she exposed her saggy breasts and belly for everyone to see. Yet again in her last painting, she challenged the social norms of what was acceptable to be depicted in art. Her self-portrait was one of her last masterpieces before she died. On October 14, 1984, Neel died with her family in New York City apartment from advanced colon cancer." -- Wikipedia 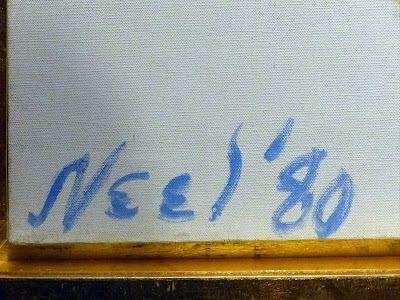