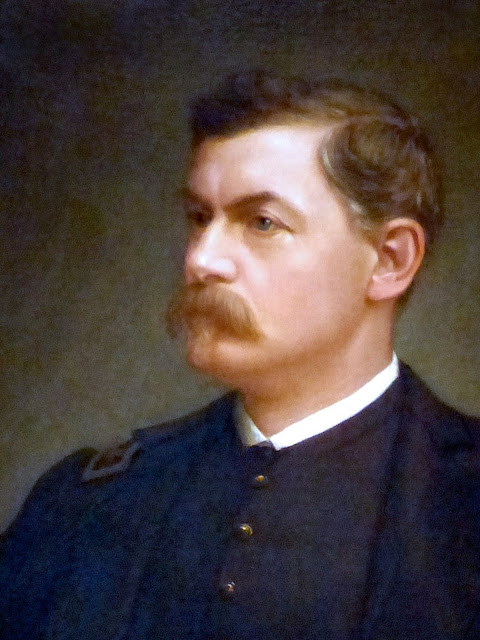 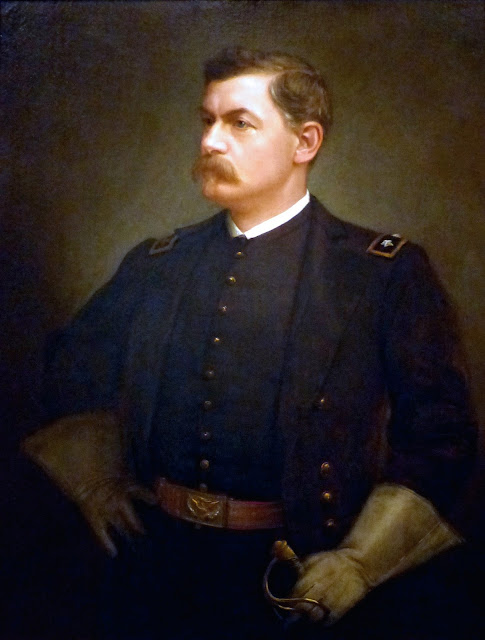 This 1888 portrait of George B. McClellan by Julian Scott hangs in the National Portrait Gallery in Washington DC.


"After the Union army's defeat at the First Battle of Manassas on July 21, 1861, President lincoln appointed thirty-four-year-old General George B. McClellan to command federal operations in Virginia. Within weeks, 'little Mac' transformed the remnants of a demoralized volunteer army into a disciplined fighting machine and christened it the Army of the Potomac. But achieving victory required engaging the enemy in battle, and in this McClellan procrastinated, much to Lincoln's exasperation. When he did lead his troops into battle, he was slow to advance and quick to retreat. Finally, after McClellan failed to pursue Robert E. Lee's army following the Union's victory at the Battle of Antietam in September 1862, Lincoln relieved him of his command. McClellan emerged briefly in national politics in 1864 as the Democratic Party's unsuccessful presidential candidate." -- National Portrait Gallery


An engraving after a painting by Alonzo Church appears in Evert Duyckinck's National Portrait Gallery, 1862, "Likeness from a recent photograph from life." 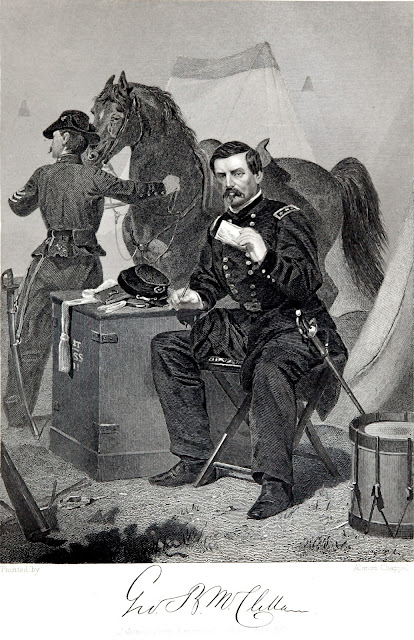 This modern photo of George McClellan, from an 1861 wet collodian negative from the Bradley Studio, also hangs in the National Portrait Gallery in Washington, DC. 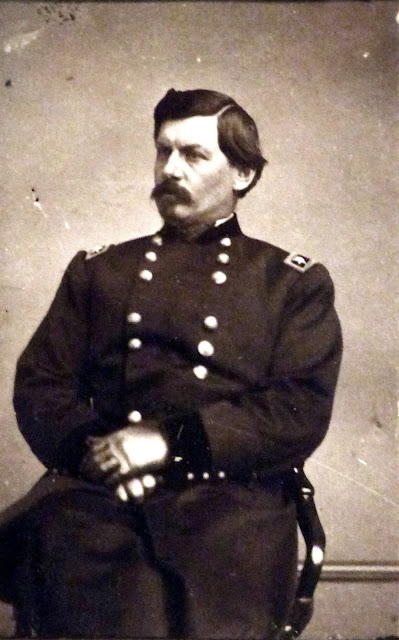 "Fresh from action in the West that had helped secure both Kentucky and western Virginia for the Union, George McClellan was President Lincoln's choice in July 1861 to take charge of the army in the East following its disastrous rout at the Battle of First Bull Run. Although, McClellan proved masterful in reorganizing, training, and restoring morale to the command he would name the Army of the Potomac, his penchant for overestimating the strength of the enemy and underrating his own army's preparedness -- undermined his effectiveness. McClellan's procrastination and inflated demands for more troops combined with the failure of his Peninsula Campaign against Richmond in June 1862 and the indecisive outcome of the Battle of Antietam -- exhausted the president's  patience. Lincoln relieved McClellan of his command after he failed to pursue General Robert E. Lee's army in the fall of 1862." -- National Portrait Gallery

This wood carving of George B. McClellan can be found in the National Portrait Gallery in Washington, DC. 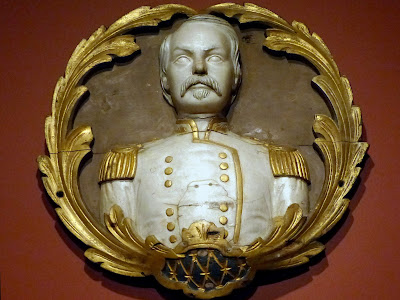 "This wood carving was reputedly removed from the stern of a ship built in Thomaston, Maine.-- National Portrait Gallery
Posted by Allen Browne at 6:00 AM