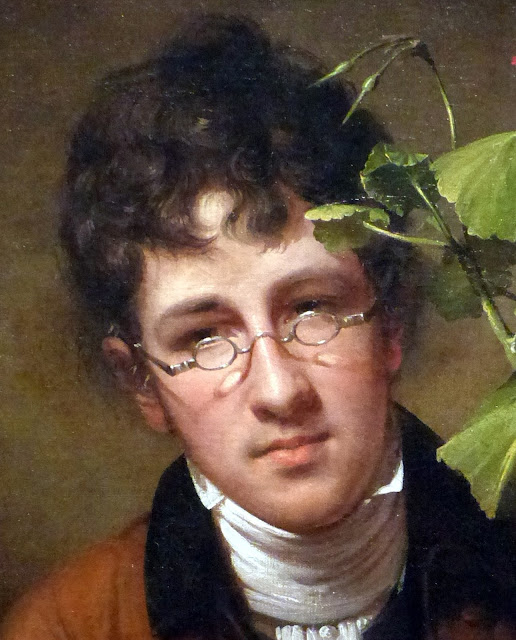 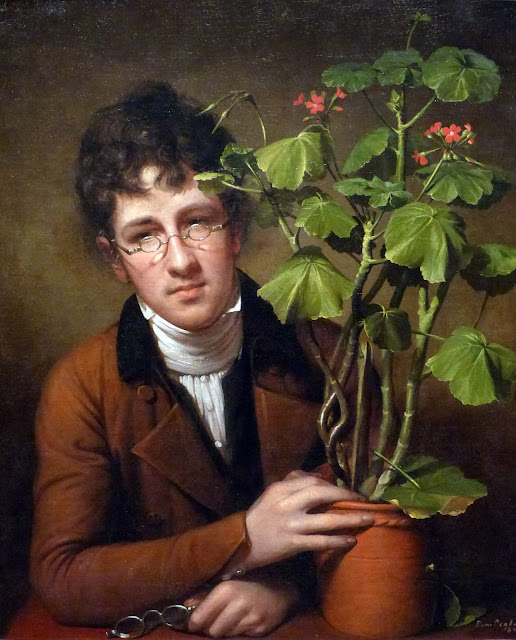 This 1801 portrait, Rubens Peale with a Geranium by the subject's older brother Rembrandt Peale hangs in the National Gallery of Art in Washington DC.


"Charles Willson Peale christened most of his seventeen children after famous artists and scientists; however, there is little consistency between the sons' and daughters' namesakes and their adult careers. While Rembrandt Peale did become a painter and the portraitist of this work, Rubens Peale, who sat for this likeness at the age of seventeen, was a botanist.

Painted in Philadelphia, the work could be described as a double portrait because the geranium,reputed to be the first specimen of this exotic plant ever grown in the New World, is as lovingly portrayed as the painter's brother is. The Peale family often collaborated in their endeavors, and here Rembrandt commemorated his brother's horticultural triumph. Rembrandt's own skill is evident in the clearly defined pools of light on Rubens' cheeks. In a phenomenon familiar to all, his glasses focus the beams passing through them, thereby forming the brighter disks of light under his eyes.

Rubens Peale with a Geranium is a supreme example of the unaffected naturalism which typified the artist's early maturity. Combining firm, clear drawing, carefully modulated color, and an intense devotion to detail, twenty-three-year-old Rembrandt Peale produced an eloquent expression of his family's philosophical orientation." -- National Gallery of Art.

The fact that Rubens Peale is shown in the portrait with two pairs of glasses, one on his nose and one in his hand has not escaped notice. In 1997 Billy Follensby wrote that:


"The painting Rubens Peale with a Geranium (1801), by Rembrandt Peale, has earned a reputation as a masterpiece of early American portraiture. In recent years the painting has also been the source of controversy, because Rubens was depicted with two pairs of eyeglasses at a time when most people would not have been portrayed with spectacles at all. Scholars of American art history and ophthalmology have studied the painting and have promoted various theories for this peculiarity. A combined study of the painting, historical documentation, and optical effects in the painting, however, sheds new light on the answer to this mystery."

After a detailed discussion, Follensbee concludes that the best explanation is the one given by Ruben Peale's daughter Mary Jane, that, in Follensbee's words,


"The painting was first painted with only the glasses in his hand, but the portrait proved unsatisfactory to the viewers, who felt that Rubens should be portrayed with his characteristic spectacles. Rembrandt complied, adding the second pair of eyeglasses to Rubens’ face, but he decided against trying to remove the pair of glasses from Rubens’ left hand. " (Survey of Ophthalmology; 41:417-424,1997.)"


Another portrait of Rubens Peale by Rembrandt Peale can be seen here: The Portrait Gallery: Rubens Peale
Posted by Allen Browne at 10:40 AM