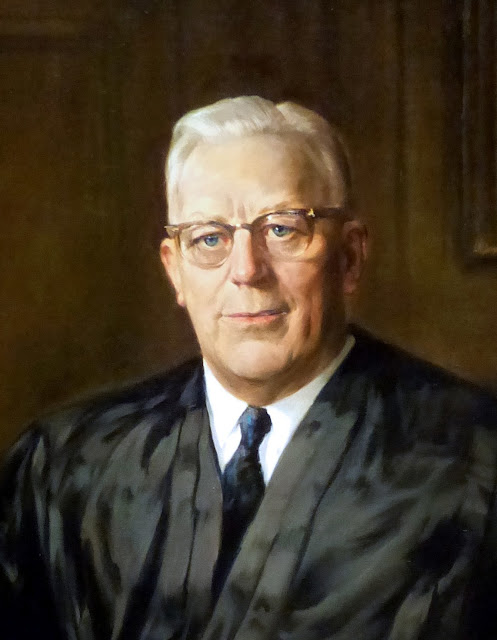 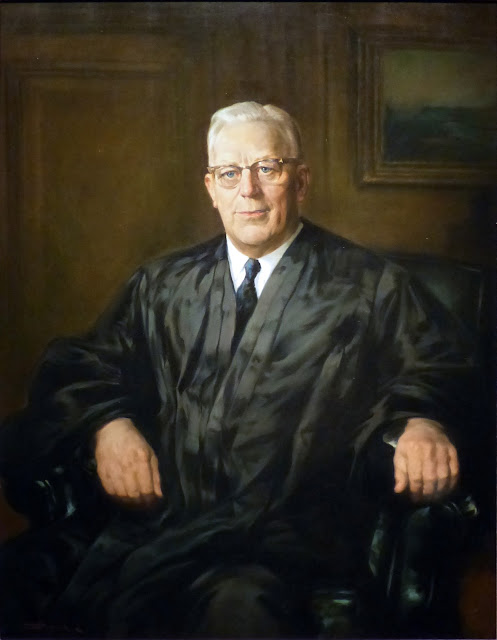 This 1963 portrait of Earl Warren by Emil Jean Kosa, Jr. hangs in the National Portrait Gallery in Washington DC. The label empathizes his role in Brown vs. Board of Education.


"When President Dwight Eisenhower appointed Earl Warren as chief justice of the United States in 1953, no one had any idea of the far-reaching impact Warren would have on the Supreme Court. But with the Court's historic 1954 decision requiring school desegregation, Americans soon had an indication.The unanimous findings in Brown v. the Board of Education disallowed the right of local jurisdictions to segregate their public school systems by race. In words carefully chosen to ensure everyone would understand his meaning, Warren declared on behalf of his fellow justices: "In the field of public education the doctrine of 'separate but equal' has no place. Separate educational facilities are inherently unequal." Despite attempts by many southern states to block forced integration in ensuing years, the Brown decision ultimately prevailed." -- National Portrait Gallery

But a deeper understanding of Warren emerges in this brief bio by NPG including his responsibility for Japanese internment during WW II.


"During a long career as attorney general and governor of California, and then as Chief Justice of the Supreme Court, Earl Warren profoundly changed his views on race. In the 1920s he was a member of a number of nativist organizations and possessed a particular hostility to Asian Americans. After the attack on Pearl Harbor in December 1941, he enthusiastically supported the internment of Japanese Americans. Then, as governor (1943–53), he surprised Californians by becoming a progressive Republican. President Dwight Eisenhower appointed Warren as Chief Justice of the Supreme Court in 1953, expecting a moderate on such issues as race. But in the Court’s historic 1954 decision Brown v. the Board of Education, Warren placed himself in the vanguard of those fighting for racial equality. Writing for the Court, he declared, "In the field of public education the doctrine of ‘separate but equal’ has no place. Separate educational facilities are inherently unequal."


As to his role in Japanese internment Warren later remarked that he:


"deeply regretted the removal order and my own testimony advocating it, because it was not in keeping with our American concept of freedom and the rights of citizens...Whenever I thought of the innocent little children who were torn from home, school friends, and congenial surroundings, I was conscience-stricken...[i]t was wrong to react so impulsively, without positive evidence of disloyalty " — The Memoirs of Earl Warren (1977)