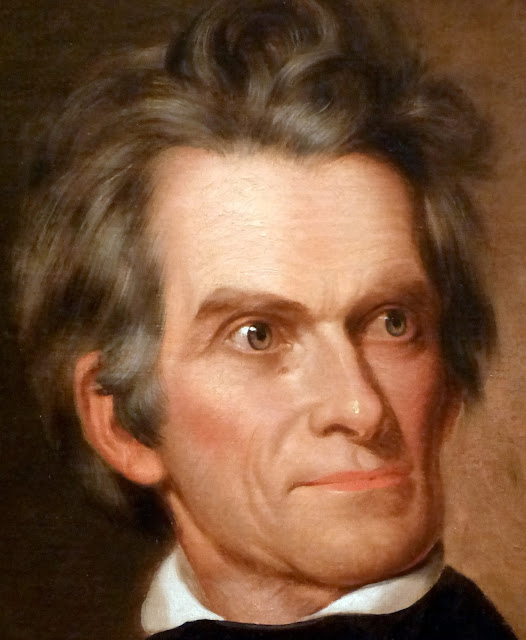 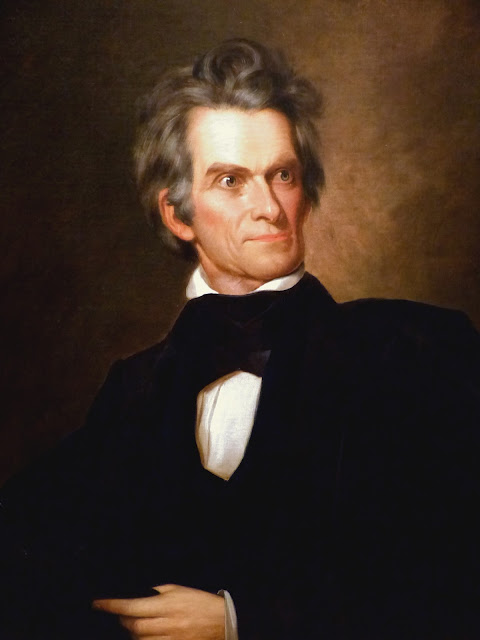 
"Born Abbeville District, South Carolina South Carolina's John C. Calhoun was a formidable presence in American politics for nearly four decades. In that time, he served twice as vice president and sat in two cabinets. It was during his later years in the Senate, however, that he had his greatest impact as a champion of southern interests and formulator of a sectional dogma of states' rights. But even as he defended the South against attempts to curb slavery and argued for the right of states to reject federal policies, he sensed that he was fighting a losing battle. His dying words in 1850 were 'The South, the poor South.'

One of five known versions of the likeness that the artist, George P. A. Healy, made from sittings with Calhoun in 1844, this portrait originally belonged to Calhoun himself." -- National Portrait Gallery


Calhoun's cenotaph can be seen in Congressional Cemetery. 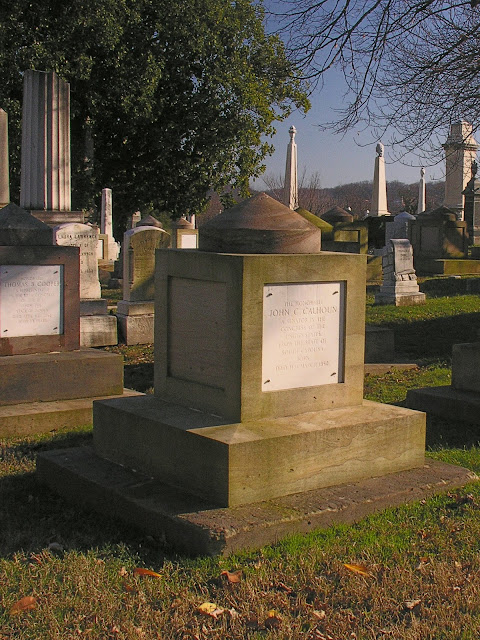 "John C. Calhoun (1782–1850) held several government positions: Vice President (twice — with President John Quincy Adams and President Andrew Jackson); Senator from South Carolina; member, state house of representatives; Secretary of War for President James Monroe; and Secretary of State in the Cabinet of President John Tyler. He was hailed as one of the giants of 19th century American politics. Along with Henry Clay and Daniel Webster he set the terms of every important debate of the day. Calhoun was acknowledged by his contemporaries as a legitimate successor to George Washington, John Adams or Thomas Jefferson, but never gained the presidency." -- Congressional Cemetery. R60/S146

Calhoun's simple monument in St. Philip's graveyard in Charleston caught Walt Whitman's attention when he was working with the wounded in a Washington during the Civil War. 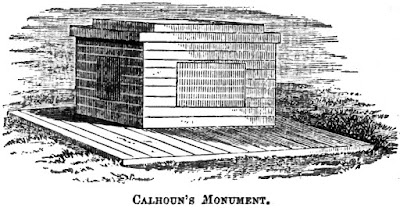 “In one of the hospital tents for special cases, as I sat to-day tending a new amputation, I heard a couple of neighboring soldiers talking to each other from their cots. One down with fever, but improving, had come up belated from Charleston not long before. The other was what we now call an ‘old veteran,’ (i. e., he was a Connecticut youth, probably of less than the age of twenty-five years, the four last of which he had spent in active service in the war in all parts of the country.) The two were chatting of one thing and another. The fever soldier spoke of John C. Calhoun’s monument, which he had seen, and was describing it. The veteran said: ‘I have seen Calhoun’s monument. That you saw is not the real monument. But I have seen it. It is the desolated, ruined south; nearly the whole generation of young men between seventeen and thirty destroyed or maim’d; all the old families used up—the rich impoverish’d, the plantations cover’d with weeds, the slaves unloos’d and become the masters, and the name of southerner blacken’d with every shame—all that is Calhoun’s real monument.’” – Specimen Days, 1892.