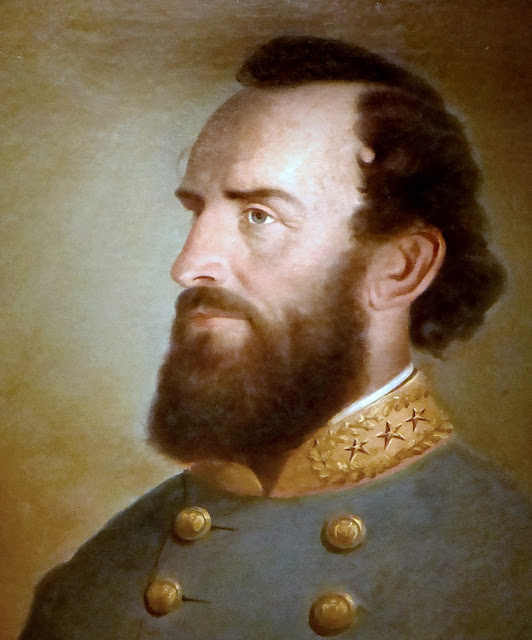 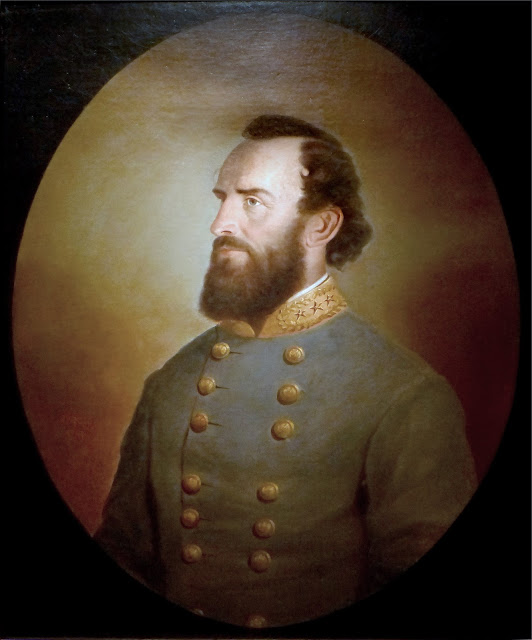 This 1864 portrait of Thomas J. Jackson by J. W. King hangs in the National Portrait Gallery in Washington, DC.


"At the First Battle of Manassas in July 18th, the unrelenting vigor with which Confederate General Thomas Jonathan Jackson held his position inspired a general nearby to rally his troops with the cry, 'There is Jackson standing like a stone wall.' From that moment on, he was known as 'Stonewall' Jackson, a name that he repeatedly lived up to, fighting under the command of General Robert E. Lee.

The deeply religious Jackson believed intensely in the righteousness of the southern cause, and a key to his success was his ability to instill his own fighting fervor in his men. One of his most brilliant victories came at Chancellorsville in the spring of 1863. Tragically for Jackson and the South, this would prove to be his last battle, as he died of wounds accidentally inflicted by his own men." -- National Portrait Gallery


This 1866 engraving of the Stonewall Jackson family by William Sartain also hangs in the National Portrait Gallery in Washington, DC.


"Southern nationalism is symbolically infused in this engraving of General 'Stonewall' Jackson seated with his wife, Anna, and their daughter, Julia. Prominently displayed on the back wall is a portrait of Robert E. Lee and sculpture busts of John  C. Calhoun and George Washington. Lee emerged from the war as the South's premier icon; he relied heavily on Jackson's military prowess and leadership up until his lieutenant's death in 1863. Calhoun was perhaps the South's foremost pillar of states' rights and the doctrine of secession, while Washington was held in the highest esteem by both sides as a revolutionary patriot and defender of the Constitution."