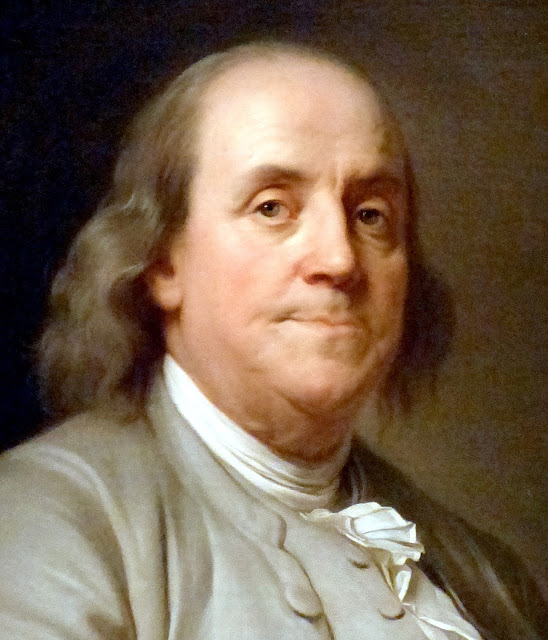 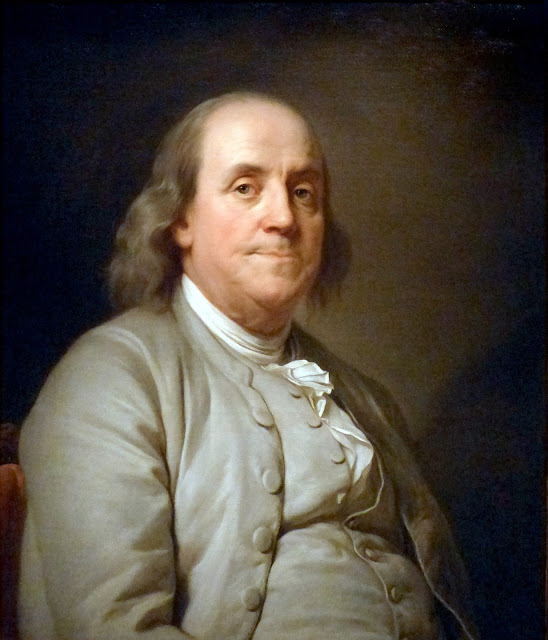 This c. 1785 portrait  of Benjamin Franklin by  Joseph Siffred Duplessis hangs in the National Portrait Gallery in Washington DC.


"Benjamin Franklin, in his day the most famous American in the world, was renowned for his scientific accomplishments as much as for his political and diplomatic triumphs. Known as a 'natural philoso­pher,' as scientists were termed in the eighteenth century, Franklin was celebrated for his experiments with electricity, but he also conducted experiments in other areas and invented devices as varied as a stove and bifocal eyeglasses. He also reorganized and expanded the American Philosophical Society in Philadelphia and was often the conduit for corre­spondence between Americans and Europeans who were studying botany, chemistry, physics, and other sciences. By the mid-1780s, when this portrait was created, Franklin was representing the new republic in France, where he was revered for his wit and scientific knowledge." -- National Portrait Gallery

The NPG further describes Franklin's political activity and this portrait.


"Benjamin Franklin represented the Revolutionary American government at the French court, America's ally in its war of independence. His reputation as a writer, scientist, and businessman was well established by the time of his arrival in France in December 1776, and he succeeded brilliantly in his mission. Jacques Donatien le Ray de Chaumont, a French admirer, commissioned Joseph Siffred Duplessis to paint a portrait of Franklin, which shows him in a red coat with a fur collar (now in the Metropolitan Museum of Art). Young Pierre Samuel du Pont commented on seeing it that Franklin's "large forehead suggests strength of mind and his robust neck the firmness of his character. Evenness of temper is in his eyes and on his lips the smile of an unshakeable serenity." The Gallery's painting is a version of Duplessis's initial portrait, with a different coat. Its early owner was Mme. Brillon de Jouy, Franklin's neighbor in Passy; their flirtatious relationship continued through Franklin's years in France. " -- NPG

If this portrait looks familiar, it's been the portrait on the $100 bill since 1996, before that another version of Duplessis's portrait was used. 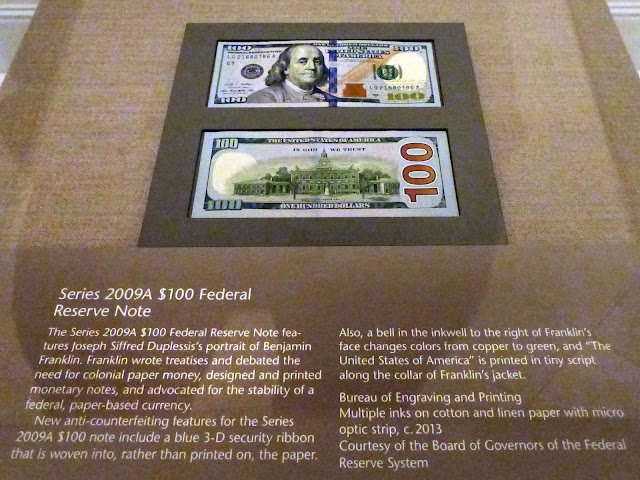 The Series 2009A $100 Federal Reserve Note features Joseph Siffred Duplessis's portrait Of Benjamin Franklin, Franklin wrote treatises and debated the need for colonial paper money, designed and printed monetary notes, and advocated for the stability of a federal, paper-based currency.

New anti-counterfeiting features for the Series 2009A $100 note include a blue 3-D security ribbon that is woven into, rather than printed on, the paper. Also, a bell in the inkwell to the right of Franklin's face changes colors from copper to green and "The United States of America" is printed in tiny script along the collar of Franklin's jacket.

Bureau of Engraving and Printing
Multiple inks on cotton and linen paper with micro optic strip, c. 2013
Courtesy of the Board of Governors of the Federal Reserve System