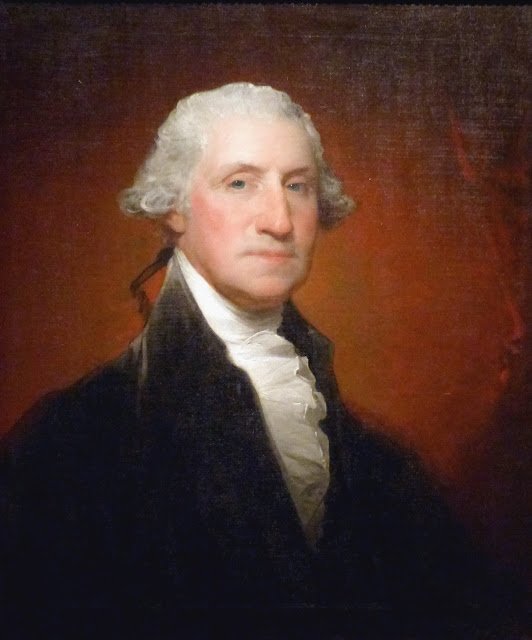 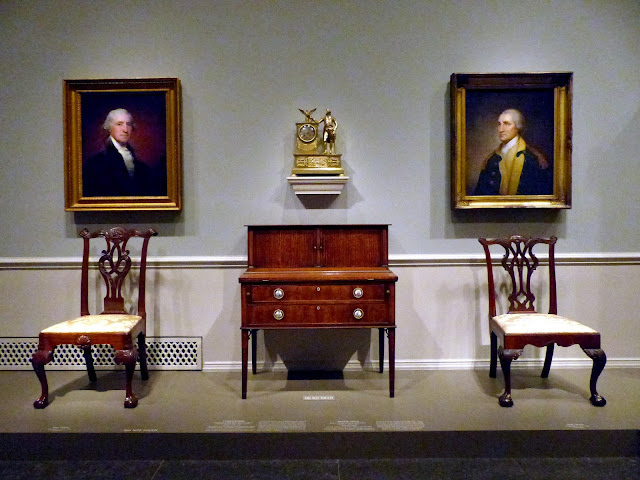 This 1795 portrait, known as the Vaughan-Sinclair portrait, hangs in the National Gallery of Art in Washington DC.


"With a letter of introduction from Chief Justice John Jay, Stuart was granted his first sittings from George Washington at Philadelphia, then the capital, in March 1795. The president, then sixty-three years old, grumbled about the drudgery of posing, and all of Stuart's wit and wisdom failed to interest him. The artist claimed that "an apathy seemed to seize him, and a vacuity spread over his countenance, most appalling to paint."

Nevertheless, this canvas has spontaneity because of its relatively quick, sketchy technique. The warm tan underpainting shows through the thinly brushed hair, while slashes of pigment model the black queue ribbon and form the highlights on collar and cravat. To impart Washington's imposing six-foot, two-inch stature, Stuart placed his head high in the design, as though the president towered above the viewer. Finally, he surrounded the president with a fiery glow like a halo.

Stuart made 104 or more likenesses of George Washington, who was president from 1789 to 1797. The pictures are grouped in categories named after the first owners of the original portraits from which Stuart made his own replicas: Vaughan (facing to his left), Athenaeum (facing to his right), and Lansdowne (full-length). Because this work was purchased by Samuel Vaughan, an American merchant living in London and a close friend of the president, Vaughan's name became associated with seventeen versions." -- National Gallery of Art

The Vaughan portrait is "Named for Samuel Vaughan, an American merchant living in London, who was the recipient of the first copy of the original painting made by Stuart."

William Sinclair was an early owner of this version of the Vaughan portrait.  An inscription on the stretcher for this portrait says:


"Portrait of General Washington painted by an Irish artist named Stewart for a public building in New York & sent by an American Gentleman as a present to William Sinclair of Belfast."