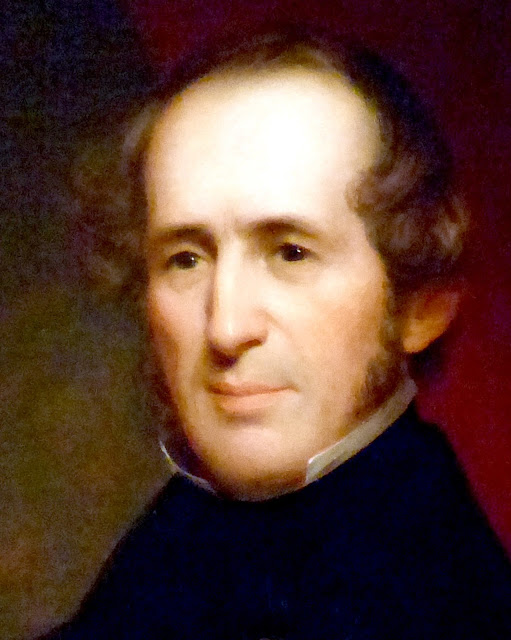 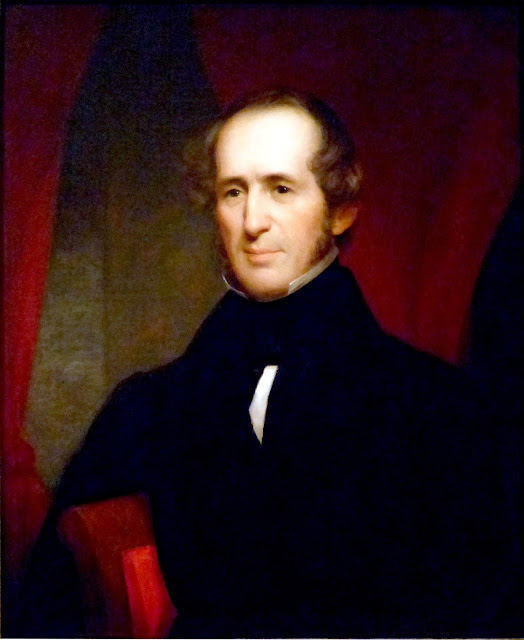 This 1846 portrait of Cornelius Vanderbilt by Nathaniel Jocelyn hangs in the National Portrait Gallery  in Washington, DC.


"'The Commodore,' as he was dubbed for his domination of waterborne transportation, Cornelius Vanderbilt created one of the first great fortunes and business dynasties in American history. He began in the rough-and-tumble world of the New York port and by 1829 had parlayed several small shipping ventures into a stake in the lucrative Hudson River trade. He branched out to dominate the New England trade and seaborne travel to San Francisco. He next moved into railroads, eventually gaining control of the industry from New York to western Canada. Vanderbilt was a ruthless monopolist, driving out his competitors through rate wars, political muscle, and hostile takeovers. But in organizing America's fragmented transportation system, he facilitated national expansion and created the infrastructure on which an expanding economy could build." -- National Portrait Gallery


"Prosperity never smoothed the rough edges that came with Cornelius Vanderbilt's impoverished upbringing and scant education, nor did it ever diminish his acquisitive instincts. Having begun his career as an assistant in his father's small shipping business on Staten Island, he presided over an extensive steam-shipping empire by 1850 and was already one of the richest men in New York City. But that accomplishment only spurred him on to other endeavors, and he became increasingly preoccupied with expanding his holdings in railroads. By the early 1870s he controlled one of the largest rail networks in America, and his personal fortune was approaching the then-unprecedented figure of $100 million.

Never one to pay too much heed to the fine points of law in his drive to best his competitors, Vanderbilt had few scruples when it came to bribing public officials or manipulating stocks. 'What do I care about the law?" he is said to have remarked on one occasion. "Hain't I got the power?'"  -- Portraits of American Railroading